One of the big topics in genealogy across the web this year has been the Genealogy do-over. While I am not participating, I have – like many others – decided that it is a good idea to do some general housekeeping and making sure that my research is up to snuff. I am generally pretty good at recording sources and such due to all those years in an academic environment so I am adding detail.

I keep running into a persistent problem. Genealogy Software.  It just doesn’t do what I want and need it to. Whether this is a function of the adherence to the dinosaur that is GEDCOM or the direct familial relationship model of genealogy I don’t know. But it frustrates the crap out of me. I know I am not the only one, Tony Procter over at Parallax View and Louis Kessler of Behold Genealogy have written some marvelous posts on the subject.

So want is it exactly I want my genealogy software to do?
I want it to look beyond familial relationships. I’m a big proponent of cluster genealogy. I didn’t know that there was an actual name for it, I just figured it was genealogy, but yes cluster genealogy. I want to be able to record information about entire communities. Windellama is a prime example for me.  As are the German Immigrants on the Commodore Perry. In both cases, the interactions and interrelations between a small number of families over about a 50-100 year period is fascinating.

I don’t just want people, I want entities. Ships in particular. The Commodore Perry, the Neptune, the Earl Grey… Passengers on immigrant ships often were connected and remained connected in ways that genealogy software cannot account for. I want to be able to group people via an entity.

Events. Like entities, I want to be able to focus on people linked by events.

User-defined colour coding of ALL THE THINGS. Because I tend to record ‘unrelated’ people in my genelogy software I like to be able to colour code direct ancestors for quick reference. My maternal grandfather’s line is red, maternal grandmother’s green (it is her favourite colour), paternal grandfather’s is blue, paternal grandmother’s is yellow. My partner’s maternal line is orange and his paternal purple (I was running out of coloured highlighters…) I also like information groups to be colour coded so I know at a glance whether I have birth info, death info etc.

There are other incidental things I’d like such as the ability to define things beyond Births, Deaths, Marriages and the occasional census; all the minute details of life that I collect, but those are the biggies.

I have customised The Master Geneologist through the use of tags and the somewhat awkward creation of a surname group ‘!Ship’ for linkage via witness/associates but this is far from ideal. TMG is great at the colour-coding thing too which is possibly why I shed a tear or too when it ceased development. 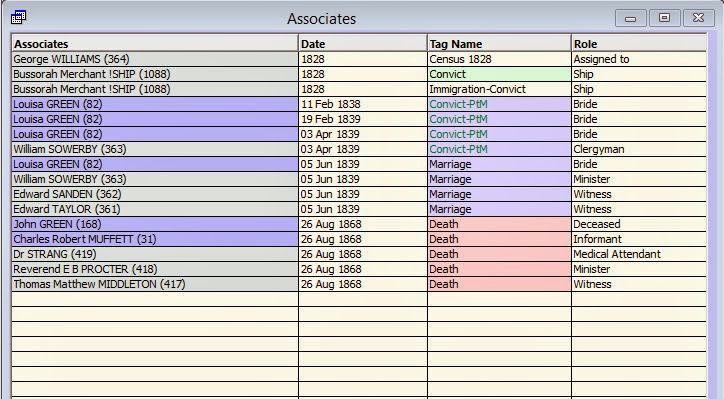 Over the past year I have also tried Family Historian, Gramps, OneNote, Word, and Excel. I have just downloaded a trial of Behold. At the moment what is working for me is a combination of TMG, Timelines and Narratives manually written in Word with Endnote as my citation software simply because it and I are old friends with an extended comfort level, a OneNote research journal and general scratch pad, Excel research logs and comparative timelines, and a set of stubbornly adhered to file and folder naming conventions. It works, but it could work better ya know.